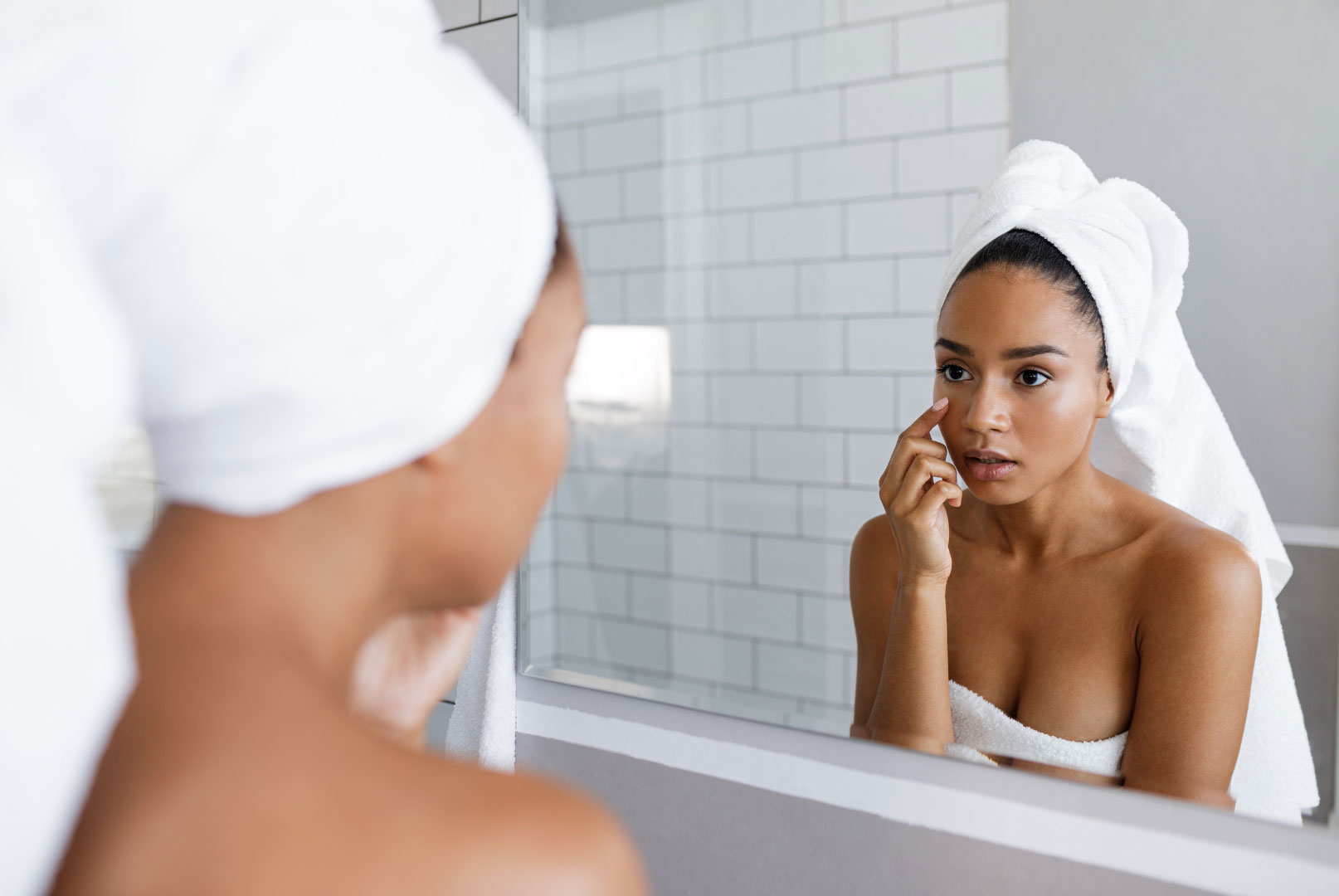 By Viviana PerrySeptember 23, 2021No Comments

Body dysmorphic disorder (BDD) is a mental illness involving obsessive focus and distress over a perceived flaw in one’s appearance, especially flaws that are nonexistent or typically unnoticed by others. Although BDD is a well established  mental illness and its prevalence in America is significant, there is relatively low public awareness of the disorder. “Body dysmorphia” is a term more commonly thrown around in conversation, and while it is a key feature of BDD, used alone its meaning is often reduced to not liking how you look. Of course, BDD is much more than low self-esteem – it is a clinically researched, DSM-5-identified mental illness. People with BDD are unable to see the reality of their own physical qualities. In order for an individual to be diagnosed with BDD, their obsessive focus on their physical appearance must cause significant, persistent distress and/or an inability to function properly in their daily life. The negative thoughts and emotions surrounding their self-image often manifest into a poorer overall quality of life and other mental illnesses, such as anxiety and depression. Those with BDD often isolate themselves from others due to overwhelming feelings of embarrassment, anxiety, and/or shame that stem from believing they are unattractive or defective. In this post, we share the facts, signs, and treatment of BDD in an attempt to generate more awareness for a seriously misunderstood, yet prevalent, mental illness.

BDD impacts people of all genders and ages. BDD affects 1.7% to 2.9% of the American population – approximately 1 in 50 people – which makes BDD more prevalent than some of the most commonly known psychiatric disorders such as anorexia nervosa and schizophrenia. Epidemiological studies indicate that 60% of those with BDD are women and 40% are men, which suggests women are a a higher risk for developing BDD than men. Although the disorder has been identified in individuals as young as 5 years old, BDD symptomology most often begins around age 12 and two-thirds of those with BDD experience its onset by age 18. These are especially disheartening figures since research has shown that those whose BDD onset occurred before age 17 are more likely to attempt suicide and have higher rates of lifetime comorbid mental disorders, specifically anorexia nervosa and bulimia nervosa.

Since BDD is still a relatively misunderstood mental illness even within mental health professionals, the disorder is often under-diagnosed or misdiagnosed. At face value, BDD has several overlapping symptoms with eating disorders, such as anorexia nervosa and bulimia nervosa, as well as with other mental illnesses, such as obsessive compulsive disorder (OCD). Especially in severe cases, the particular characteristic of misperceiving the reality of their physical appearance could be considered evidence of delusions and/or hallucinations, which may result in BDD being misdiagnosed as a psychotic disorder. In order to better operationalize the diagnosis of BDD, the DSM-5 categorized it as an “obsessive compulsive related” disorder in 2013. Still, more research and training is needed for mental health professionals to identify and treat BDD appropriately and effectively.

Like several psychiatric disorders, the cause of BDD is not clear, but research suggests it is the result of different factors, such as genetic predisposition and neurocognitive differences. Although there have been fewer studies done on the genetic portion of BDD, there is evidence of heritable influences. One study found the rate of BDD diagnosis to be 4 to 8 times higher in those with a family member also diagnosed with BDD than in the general population. Additionally, a preliminary study found a strong association between two genes and BDD. In regards to neurocognitive function, separate studies found that individuals with BDD demonstrated poorer performance in recognizing facial emotions and they perceived ambiguous situations as more threatening than healthy controls. Altogether, this suggests evidence of irregular emotional processing in those with BDD.

Lastly, it is important to note that there are two subtypes of BDD: Muscle Dysmorphia and BDD by Proxy. Muscle Dysmorphia is often informally referred to as “bigorexia” or “reverse anorexia” as the disorder is characterized by an obsessive focus on one’s muscular physique, and is paired with the persisting belief that they’re not large enough. Meanwhile, in BDD by Proxy, the individual no longer focuses on their own appearance, but instead preoccupies themselves with that of other people.

”Since body dysmorphia affects 1 in 50 people, and the majority are women; it is ever so important to recognize the way we view and speak about our body and reach out to a mental health professional if behaviors are affecting our daily life.

As previously noted, BDD is categorized by the DSM-5 as an obsessive-compulsive related disorder. This means that the symptoms and signs of BDD closely resemble those of OCD, but are not exactly the same. The key sign of body dysmorphia is a distressing preoccupation with what sufferers perceive as a flaw in their appearance, which they’re unable to let go. Signs of BDD are best described as repetitive, compulsive behaviors aimed at hiding, fixing, or obtaining reassurance about perceived flaw(s). These signs may look like:

On average, those diagnosed with BDD spend 3 to 8 hours a day fixating and distressing over their perceived flaws, and an overwhelming majority feel the preoccupation with their appearance consumes their entire day. Those with BDD may dislike a particular region of their body or their entire body as a whole. Symmetrical features are also a common concern in BDD. The most common BDD fixations are skin (usually facial), hair (such as with balding), and nose shape/size. Those with mild cases of BDD typically describe their flaws as “unattractive” or “ugly,” while severe cases of BDD see themselves as “abnormal” or “deformed.”

Severe social anxiety and avoidance are common symptoms of BDD for multiple reasons. The incessant inability of those with BDD to accurately perceive the reality of their physical appearance may cause tension in their familial, friend, and romantic relationships since no amount of reassurance is enough to convince them they do not look ugly or abnormal. Additionally, the majority (2/3) of those with BDD are unable to let go of the thought that others are taking special notice of their flaws and criticizing them or making fun of them. It is these constant misinterpretations of others’ words and behaviors that result in extreme feelings of shame, embarrassment, and/or deep self-loathing, which often prevents those with BDD from functioning properly in social settings or attending social events altogether. It is important for those who suspect they may have BDD to get treated since, left untreated, the disorder is often accompanied by diagnosable levels of depression, anxiety, and disordered eating, as well as intense emotions of guilt, anger, and grief.

The first step to treating body dysmorphia is recognizing that there is a problem with the way you view and speak about your body. If you or someone you know has been experiencing these issues, don’t be afraid to talk to your primary doctor about the psychiatric resources and professionals that can properly diagnose and treat mental illnesses.

There are both effective therapy- and medication-based treatments for BDD. The most commonly used therapy-based treatment is CBT, or Cognitive Behavioral Therapy. In both methods of treatment, the goal is to reduce/eliminate repetitive compulsive behaviors while decreasing the distressing core beliefs of those with BDD. CBT involves helping the patient identify unhealthy thoughts about their appearance and learn new behaviors. Those with BDD tend to have extremely rigid belief patterns regarding appearance and CBT is effective in introducing some flexibility into those mental scripts. For example, a person with BDD may initially believe “If I am not attractive, I am not lovable.” With CBT, the person with BDD may be able to change that thought to “Even if I don’t feel attractive, I am still lovable.” Another goal of CBT is to identify the patient’s triggers so the patient and therapist can create a plan on how best to avoid or cope with them. Then, therapists ask patients to gradually engage in more challenging experiences so they may practice using those new coping mechanisms.

Medication-based treatment typically involves the use of a specific type of antidepressants called SSRIs, or selective serotonin reuptake inhibitors. Serotonin is a brain chemical associated with feelings of happiness, well-being, and satisfaction, and SSRIs work by increasing serotonin levels in the brain. In addition to BDD, SSRIs are used in the treatment of several different mental illnesses, such as major depressive disorder and anxiety disorders like OCD. Specifically in the treatment of BDD, SSRIs serve to reduce the obsessive thoughts/emotions and compulsive behaviors that cause distress. Oftentimes, SSRIs are used in conjunction with CBT since the chemical regulation that SSRIs induce can help patients participate more effectively in CBT.

Numerous online resources exist for those suffering from BDD, and the Anxiety and Depression Association of America has compiled a helpful list of public and professional webinars, articles, blog posts, and more. In addition, there are many support groups where people can connect with others dealing with similar problems. The Body Dysmorphic Disorder Association provides access to 18 online support groups that meet through Skype and Zoom, but your primary doctor or mental health professional may be able to guide you to a support group in your area.